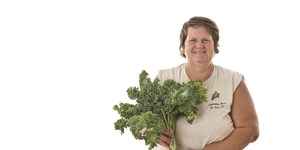 Findlay Market is the only surviving municipal market house of the nine public markets operating in Cincinnati in the 19th and early 20th century. The market house is built on land donated to the City of Cincinnati by the estate of General James Findlay (1770 - 1835) and Jane Irwin Findlay (1769 - 1851). Findlay Market is Ohio's oldest surviving municipal market house. It was designed under the direction of City Civil Engineer Alfred West Gilbert (1816-1900) using a durable but unconventional cast and wrought iron frame, a construction technology that had been little used in the United States. Findlay Market was listed on the National Register of Historic Places in 1972. The structure was among the first markets in the United States to use iron frame construction technology and is one of very few that have survived.

Built originally as an open-sided pavilion, the market was erected in 1852 but disputes with contractors and difficulties correcting problems with the new construction methods delayed its opening until 1855. The center masonry tower was added in 1902. Soon after, public health concerns about the market, which was open to the elements and exposed to increasing urban pollution, prompted enclosure of the market house and the addition of plumbing and refrigeration. Merchants previously had used cool storage in deep cellars beneath nearby breweries.

The market house tower bell, rung at the start of each market day, was brought from Cincinnati's Pearl Street Market when that facility was torn down in 1934. Findlay Market was renovated in 1973-74 as part of the federal Model Cities program. It was renovated again and expanded in 2002 and 2003.

James Findlay was an early Cincinnati settler and civic leader. In 1793, at the age of 23, he brought his new bride, Jane, to the small Ohio River settlement then called Losantiville. James and Jane were younger children of prominent families in Mercersburg, Franklin County, Pennsylvania. Permanent settlement in the basin along the Ohio River between the Great and Little Miami Rivers had become feasible fewer than four years prior to the Findlays' arrival when the new federal government built Fort Washington in late 1789. A year later, in 1790, the settlement's name was changed from Losantiville to Cincinnati.

Findlay and a partner, James Smith, built a log store near the Ohio River in 1793 and, a year or two later, moved operations to a larger general merchandise store around the corner from the original site. Findlay was among the early entrepreneurs and land speculators who both fueled and profited from young Cincinnati's rapid growth from a population of 1,000 in 1802 when it was incorporated to a population of more than 46,000 in 1840. By 1860, Cincinnati's population of 160,000 ranked it among the ten largest cities in the nation.

James Findlay's first years in Cincinnati coincided with a period of Indian warfare that concluded in 1795 with the Treaty of Greenville. Steamboats didn't arrive on the Ohio River until 1811, so merchandise for Findlay's growing retail business was packed in from the east by horse or brought down river by boat, at great peril prior to the cessation of hostilities. During the summer of 1794, Findlay himself was attacked and nearly killed near Portsmouth, Ohio and a wagon and driver from his store were lost in an attack while delivering supplies to Fort Hamilton, north of Cincinnati.

James Findlay served as Mayor of Cincinnati in 1805 and 1810. He and twenty-four other citizens established a public library in Cincinnati in 1802. During the War of 1812 he commanded a regiment near Detroit, built a fort near what later became Findlay, Ohio, and was taken prisoner by British troops. Following the war, he was elected to the U.S Congress and served as a Major General of the State Militia's First Division. Findlay served in Congress with his brothers William and John, each of whom represented Pennsylvania districts, one of only two times in American history that three siblings served simultaneously. (William Findlay was also elected a United States Senator and governor of Pennsylvania.)

With profits from his successful retail business, James Findlay purchased large tracts of wooded land immediately north of the Cincinnati city line in what was then called The Northern Liberties. Findlay's forested property become known as "Findlay's Woods." Hoping to develop the area, Findlay and Jepthah Garrard recorded a Northern Liberties town plat on June 3, 1833. The plat established many streets that exist today (Findlay, Green, Race, and Elm), as well as the locations of some streets west of Vine Street that have since been renamed (Elder, Republic, McMicken). The plat also established, in an open area used by local farmers as a market, a location for a farmers market and general store along what became Elder Street.

General James Findlay died in 1835 before the market and store could be built. His widow, Jane Irwin Findlay, remained a prominent citizen of Cincinnati. In 1840, she moved briefly to the White House in Washington, D.C. where she assisted her niece, Jane Irwin, President William Henry Harrison's daughter in law. The newly elected President had asked Mrs. Irwin to stand in as the nation's official First Lady because his wife was too ill to accompany him to Washington. The assignment proved short lived because President Harrison himself died of an illness in 1841 shortly after taking office. Mrs. Findlay returned to Cincinnati, where she died in 1851. She and General James Findlay are buried in Spring Grove Cemetery.

After Mrs. Findlay's death, executors of the Findlay estate donated the parcel identified as a market on the Northern Liberties town plat to the City of Cincinnati, stipulating that it be used to build a public market named for and commemorating General Findlay.

The Northern Liberties and Over-the-Rhine

Until 1849, today's Liberty Street, then called Northern Row, was the corporation line forming Cincinnati's northern boundary. The area north of Northern Row was not subject to municipal law and was, appropriately, called The Northern Liberties. During the first half of the 19th century, the Northern Liberties attracted a concentration of bootleggers, entrepreneurs, saloons, gambling houses, dance halls, brothels, and other institutions not tolerated in the city of Cincinnati. Among those was the city's first Roman Catholic Church, St. Peter's Church of the Dominican Society, erected in 1818 on the northwest corner of Liberty and Vine streets. Unregulated freedom beyond Liberty Street ended in 1849 when The Northern Liberties became the first suburb annexed to the growing Queen City.

The Northern Liberties roughly correspond geographically with the Over-the-Rhine (North) Local Historic District established in August 2001. The Historic District Designation Report documents expansion of the ethnic German immigrant community in Over-the-Rhine into the Northern Liberties during a wave of German immigration between 1830 and 1840. Developers subdivided the land, laid out streets, and began to build houses and businesses. German churches, cultural institutions, and newspapers were founded, including the nation's only German language daily newspaper. German entrepreneurs developed an extensive brewing industry in the area consisting of 36 individual breweries by 1860. German immigration to Over-the-Rhine continued through the last half of the 19th century. Most of the 950 structures in the Over-the-Rhine North district were erected between 1860 and 1900. According to the Historic District Designation Report, "Over-the-Rhine's collection of commercial, residential, religious and civic architecture is one of America's largest and most cohesive surviving examples of an urban, nineteenth century community."

The percentage of German and German-American residents in Over-the-Rhine peaked in the early 20th century at an estimated 75% of the neighborhood's population of 44,475. Population patterns in Over-the-Rhine during the 20th century reflected trends throughout the nation. The ethnic German community began to disperse into the city's growing suburbs, particularly with the rise of anti-German sentiment during the First World War. During the Great Depression and Second World War, waves of rural Appalachians migrated to Over-the-Rhine where they found abundant low cost rental housing and jobs in nearby industry. During the decade of the 1960's, the population of Over-the-Rhine declined by more than half, to 15,025, but the number of African-American residents doubled as a result of displacement from the nearby West End due to Interstate highway construction and urban renewal. The population of Over-the-Rhine has continued to decline and is now roughly 70% African-American.

During the 18th and 19th centuries, public markets were a primary source of perishable food for residents of America's growing, densely populated cities. Many cities, including Cincinnati, built and operated large municipal markets that housed butchers and fish sellers and attracted farmers and produce vendors to surrounding streets. Cincinnati operated nine public markets at the start of the Civil War.

However, public markets began to decline in Cincinnati during the late 19th century. The construction of five inclined railroads connected to the city's street railroad (trolley) systems made it possible for working people to move out of Cincinnati's densely populated river basin. This population shift led to the creation of neighborhood business districts that included grocery stores on the hills. As a result of increasing competition and declining population, only one survives today - Findlay Market, built in 1852 on Elder Street between Elm and Race.

Findlay Market continued to thrive into the 20th century because it was supported by its densely populated Over-the-Rhine neighborhood, which reached a high population of 44,475 in the 1900 census. The markets described below were not so fortunate. They closed as people moved away from downtown Cincinnati, new neighborhood business districts emerged in the suburbs, refrigeration arrived in the home, and the automobile altered lifestyles and the shape of the city itself.

Markets also operated at various times on Seventh Street, Government Square, and at Hay and Tree.